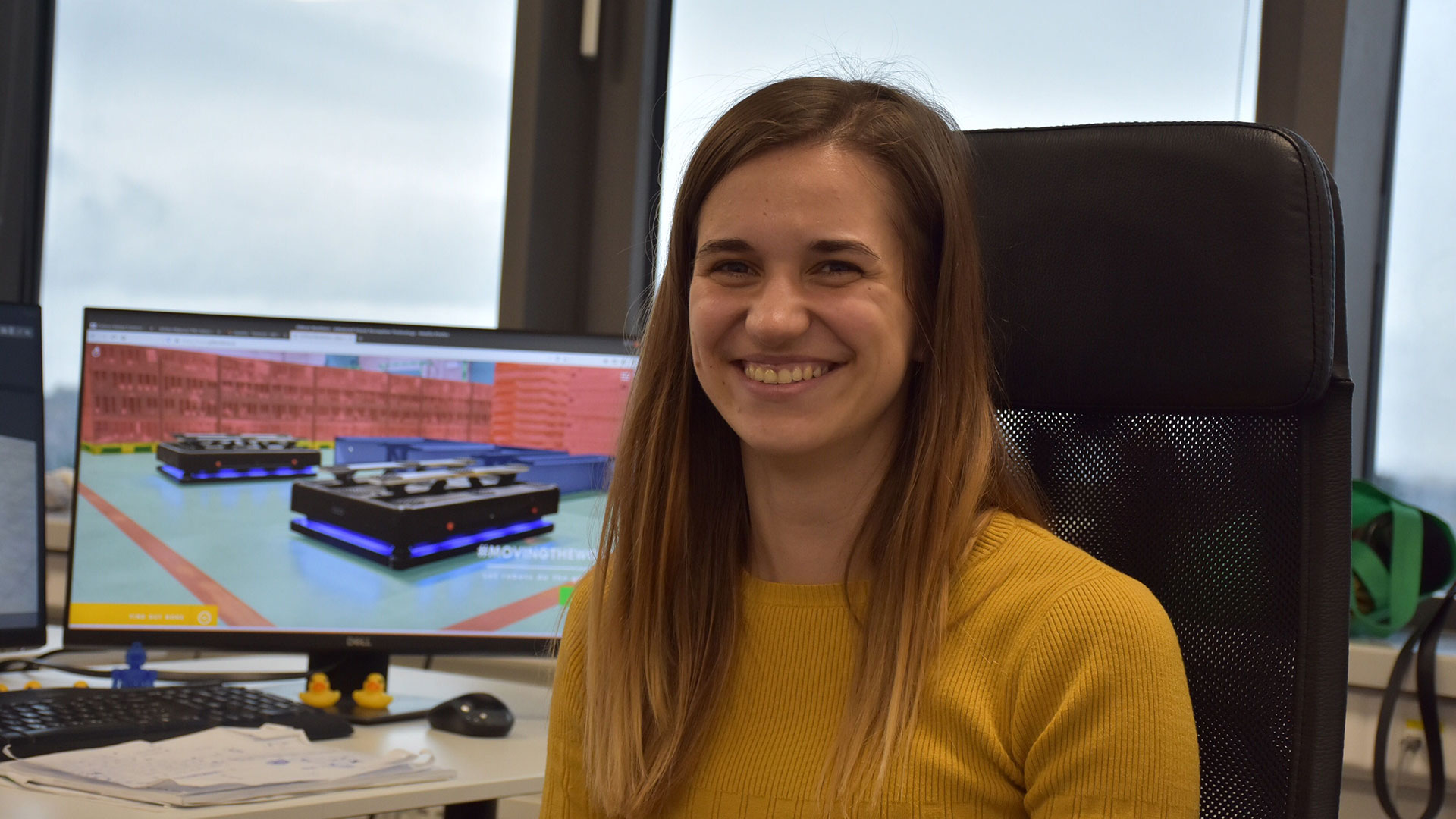 Hi everybody, my name is Anja and at the moment I work at Gideon Brothers in Zagreb as a Robotics Software Engineer. I graduated from FER four years ago and I often miss those days. After graduation, I worked at Rimac Automobili as a Software Engineer on Infotainment systems and the autonomous car, and at the Institute in Ljubljana as a Research Scientist on SPEXOR project, which works on the development of exoskeletons, but eventually I decided to return to Zagreb (because it’s the best 😉 ) and got a job at current company. In my spare time I like to go trekking, snowboarding, hiking, climbing … Basically every sport that involves nature and fresh air!

What do you do?

At the moment, I am working on simulator development. To give you a little background, Gideon Brothers is a company that works on the development of warehouse automation robots. My job is the development and maintenance of the simulator and testing system, where other team members can test their code before implementing it in the robot and production.

Everywhere I worked so far, my workdays always started with coffee 🙂 and making a to-do list of things I want to complete that day. After that I start to work and I often get so immersed in coding that time can fly by very quickly, and before I know it, more than half of the workday had passed. After lunch, I continue to work on the tasks that I set for the day; sometimes I stay longer at work and sometimes I leave early, it all depends on how satisfied I am with what I did.

What skills and knowledge do you use in your job? Which of those did you learn during your study and which did you learn later or independently from study?

Since graduating, I have mostly been using C++ for work. Everywhere I worked, C++ was the main programming language and after that I would adapt depending on the immediate needs; mostly it were scripting languages such as Python or Bash, while, for example, at Infotainment we used Qt.

I didn’t learn C++ during study, I mostly used Python or sometimes Java for labs. I don’t think that you are supposed to learn a specific language at FER, it is about the way of thinking and functioning of a language. Because of that, after I got my first job after graduating, I didn’t find it difficult to relatively quickly start coding in C++ and developing myself in that direction. Of course, I had the support of an excellent boss who found the time to help me every time I got stuck and explain everything I wanted to know.

What was your career path like after graduation? How did you change workplaces and find new jobs?

My first job, if you can call a one-month internship a job, was at Farmeron. I just finished my third year of study and I remember that I was still convinced that I would want to work in front-end development. After the internship, I was still into it for some time, but then I discovered robotics and decided to try it. I went to the Erasmus internship in Estonia, to the Biorobotics lab at the Tallinn University. Initially, since I had knowledge of front-end development, I was developing robot web interface, slowly learning ROS through that. While I was still in Estonia, I sent an email to professor Mišković, asking him to be a supervisor on my diploma thesis, so that I would be able to continue to work on underwater robotics. At the same time, I sent a letter of interest to Rimac Automobili for a position of junior software engineer. After getting a job there, I started to be very interested in electric cars and their development, but who wouldn’t be when surrounded all day by supercars and the enthusiastic people building them! At first, I worked on the infotainment systems and CAN communication (component communication protocol inside the car), and later I switched to the autonomous automobile development team. After 3 years, I got the opportunity to work on a project in the Institute in Ljubljana in the Department for Biorobotics, so I spent half a year working on exoskeletons that help people with back pain. After the project ended, I was thinking about what to do if I returned and I found a young company called Gideon Brothers. I was interested in what they were doing, and so I decided to apply for the position of Robotics Software Engineer.

I must admit that over the past 4 years since I graduated, I didn’t really know what I wanted to do. I was interested in everything; robotics, front-end, electronics, electric cars, autonomous cars… Every time I achieved one goal/wish, I found a new one. I think that’s what kept pushing me into new challenges. I don’t regret frequent changes of areas of interest because that is the reason why I now have a broad knowledge in many areas, but there are still many challenges ahead of me in the future. I still don’t know if I am on the right path, but I do know that at the moment I am doing something that makes me happy and that is the most important thing 🙂

What advice would give to students who are looking for a job?

I would tell them that they should not be afraid to apply for positions for which they do not have all the required knowledge. Companies often look for people who are willing to learn new things and they want to see if you have the potential and how you fit in into the team. I remember my first job interview at Rimac Automobili; I applied for the position of C++ developer, and I have never programmed in C++! During the interview, I was asked if I had knowledge of C++ and I honestly said that I didn’t, but that I was very eager to learn and that I believed I would quickly adapt. They asked me a few technical questions to see how I think and I got the job!

When applying for the first job, nobody expects you to know everything, but it is important to be motivated to learn. So, I would advise everybody to be bold and to apply fearlessly for any job that they are interested in because there is nothing to lose!